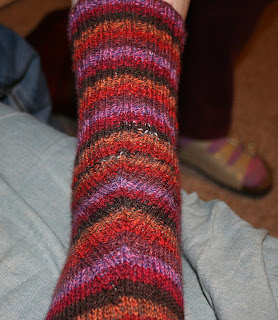 This "sock recipe" assumes you are familiar with making a basic, top-down sock with a flapped heel: I won't be walking you through the heel or toe. You can make these socks with any needle configuration, though I’d find it easiest using Magic Loop or two circulars.

Cast on whatever multiple of 4 stitches will get you a sock width width you prefer, in whatever method you like to use for a good, stretchy cast on. I used 64 stitches and my usual loose knitted cast-on.

Knit the sock leg in K2, P2 ribbing until the leg is as long as you wish. Since I like to have my legs contain a multiple of the entire repeat pattern of any self-striping yarn I use, I did three repeats of the striping pattern in my yarn. This turned out to be a smidge over 6 inches or 15 cm, which is within my usual 6-8” (15-20 cm) sock length range.

Do the heel normally. After you have picked up all the stitches, knit a couple of rows with ribbing on the instep and stockinette on the rest. EXCEPT, if you want your converging ribs to go further down the sock, you can add two purls to the end of the sole stitches. This is what I did, and the rest of the pattern assumes you've added the two purls to what will eventually be the instep.

Next, for ease of knitting and counting, rearrange your stitches to where the sole has half the number you originally cast on (for me, 32 stitches) and the rest are all on the instep side. You will be gradually decreasing this side down until it matches the other half.

For the rest of the sock, the sole stitches just march along in stockinette. You’re not going to do a gusset.

Now you’re going to decrease the instep side by making the ribbing converge in the center. I didn’t center the ribbing, because I wanted each side to swoop in at a different rate. Call me asymmetrical! 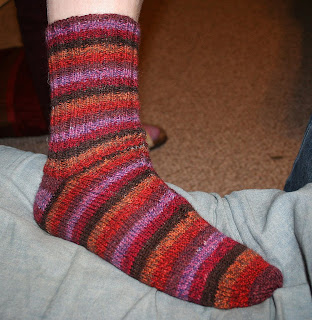 DECREASE ROW: Knit the knits and purl the purls until you get two stitches before the center. You should be finished with a P2. Perform a centered double decrease as follows:

Slip the next two stitches TOGETHER as if to knit (both at the same time), K1, pass both slipped stitches over. Continue the instep, knitting the knits and purling the purls.

You’ll see a knit stitch sort of raised up. That’s the center. You’ll always do your decreases with a stitch above that one as the center. Finish the row.

Knit two rows in pattern (purling where you see purls).

Repeat this pattern, one decrease row followed by two no-decrease rows, making sure you do the double decrease by slipping the stitch two rows above your last decrease and the stitch before it, then knitting the stitch after your center, and passing the two over. You will have a nice line in the center.

When you have decreased to the point where your instep and sole stitch counts are the same, change the pattern.

Continue in this fashion until you have no more purl stitches. You will finish decreasing away the purls on the left side before the right (or vice versa if you didn't add the two additional purl stitches). That’s fine.

You’ll have a fun pointed front to the sock. Finish as you would any other sock, starting the toe decreases after the sock covers your little toe. You can do any toe style you prefer.

Why do we decrease every third row rather than every other row, like you would on a standard sock gusset? It’s one of those things Cat Bordhi writes about in her “New Pathways” patterns with all the unique ways of increasing or decreasing for sock insteps. It just gets too tight along the instep if you decrease two stitches every other row. So, rather than knit a tourniquet, like I did the first time I tried this pattern, take it from me and decrease every third row. Instep comfort is also why I asked you to knit two rows with no decreases after the heel. If you have a high instep, consider starting the decreases later OR decrease every fourth row the first few times.

Other ideas: You could easily do this centered decreasing on socks with no ribbing. You’d still get cool curves. Or you could do K1 P1 ribbing. You might want to put an odd number of stitches on the instep, so your center stitch would be a continuation of the center K1 rib. If you have a high instep, consider starting the decreases later OR decrease every fourth row the first few times.

Let me know if you have questions. You can leave a comment on this blog post, or contact SunaSAK on Ravelry.
Posted by Suna Kendall at 8:00 AM