Ocean Pearls
Originally uploaded by sunasak
Now that I have the name of the cardigan down (I think I called it Ocean of Pearls earlier), I should write more on this.

I feel a lot better about the project, even if it doesn't look like much in the photo. What happened is I took the advice from a couple of people on Ravelry, who said it works a lot better on a smaller hook. So, yesterday I got a size E at the yarn shop and tried that out. Um, well, THAT made a difference. I went from struggling and cursing with each bobble/pearl, so making at least 9 out of 10 of them successfully on the first try--no snagging, no sticking. Wow. So, obviously the thing to do was to start again. What you see is the second time I got that far on the project. The first couple of rows, which have a bunch of bobble, look a bit different than the later ones, but I think it will be OK. I am making the size 36 and the back is just a bit over 18", so I am pleased. I think 36" around would have been a tad too tight.

I think it also helped that I did the foundation chain much looser the second time around. There's nothing wrong with starting a project more than once--I seem to do that most of the time with garments, anyway. I am finding crochet just what I need to relax after a long day, and that is what I have needed (I did training rather than writing for the last two days, and 8 hours of talking to people tires my introvert self out).

I am getting a bit done on the socks, too, at lunched and at the yarn shop last night. I was so into all the good gossip and news items, though, that I really didn't get a lot done. The socks STILL are very fraternal, but everyone who sees them likes them a lot.Now I am doing the Tribute to Tie Dye with a new Hiya Hiya 40" circular, though. Using the two shorter size 0s was getting on my nerves. Not so much rattling needle doing magic loop. Aah. 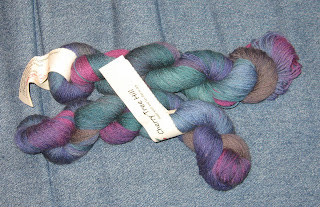 So, hmm, I got new needles, huh. Did I get anything else, you may ask? Did I perhaps go a little nuts at the last Loopy Ewe Sneak Up? Was it because of the word "possum" combined with "sock"? Sigh, yes, it was. I had bravely refrained from another sock site's possum sock offering, but, dang it, when TLE got some, I had to get it, knowing there might not be any more avaiable for quite a while. So I splurged on two skeins of the Secret Garden colorway. It is definitely soft stuff. I can't WAIT to knit with it. But I will, given how much yarn I have. I may have to make yet another exception to the random choice rule for it! 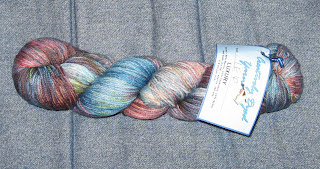 And, of course I needed free shipping, so I got two other sock yarns, too. One is something I totally fell in love with the moment I saw it. It is Creatively Dyed Yarns' Luxury sock yarn, which has 10% cashmere. But I got it for the colorway, which is called "Winds of Change." I think it has every color in the rainbow in it, but subdued versions. And it is all mixed up and blended in really intriguing ways. It's not even all dark--inside the skein I just spied some lighter sections. This will be really cool to knit with. 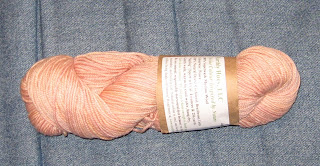 And to round it all off, I got one more. It's a sport-weight semi solid that I got because it is all naturally dyed. It's Sapling, by Earthly Hues, and the colorway is a peachy thing "Peace." I think I mainly got it as a memory of this week, which I have dedicated to thinking about peace in honor of the people who were shot and killed or injured at a Unitarian Universalist church last weekend (been wearing peace sign earrings every day).

I sure love yarn. I guess it's not as bad for me as crack or ice cream.
Posted by Suna Kendall at 9:12 PM