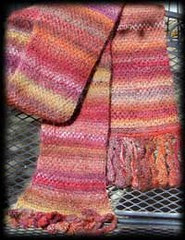 This scarf hung in my local yarn store for a long time, and I sold copies of the pattern. I've decided to share it, instead, so please enjoy. As always, let me know in the comments if you find any mistakes or have any questions.

Construction Notes: Scarf is knit predominantly in the round using linen stitch. When the main body of the scarf is complete, you close the ends up to make a two-layer rectangle, then knit a simple back-and-forth border with really fun, yet easy, bobbled fringe that makes for lots of swingy fun when worn. The yarn is a beautiful self-striping mohair blend that seems to never repeat itself—mesmerizing!

Directions: Cast on 68 stitches using your favorite provisional cast on. (Later, you will pick up the ends of these stitches for the border.) Divide the stitches into quarters (17 stitches per needle) if using 5 double pointed needles. Divide in half if using two circulars or the magic loop. If using one smaller circular needle, place a marker for the beginning of rounds.

Repeat rounds 1-4 until scarf is approximately the height of the intended owner—that makes it fall to their hips when draped around the neck. Or knit to desired length, making sure you have at least half a ball of yarn left for the borders. The slip stitches at the beginning and halfway marks will make a natural folding place, like a fake seam down the sides of the scarf.

Border A: You will need three needles to close off the scarf ends, two to hold the stitches and one to knit them with. Align each half of the stitches (front and back of scarf) in parallel (if you were using 5 needles, but half on each of two needles, and use a third to knit). Knit across, knitting one stitch from each needle each time. You will go from 68 parallel stitches to 34 stitches.

When bobble is complete, cast off remaining stitches. When you get to the last cast on stitch, knit it together with the next scarf stitch, then cast off one (the idea is you will have one bobbled fringe for every two stitches on the scarf).

Repeat fringe instruction above until only two stitches are on the needle, K2tog and end off.

Border B: Now you need to make a matching border on the end where you started. Remove provisional cast on and put the live loops on, with the front stitches on one needle and the back stitches on another. Align as for Border A and close off the scarf edge as in Border A. Note that you will probably have an odd number of stitches, due to picking up from the cast on edge. Just bring up a loop on the odd half and knit it together with the final stitch on the half with an even number of stitches to nicely close off the scarf end. Complete Fun Bobbled Fringe as above.

Copyright ©2006 Sue Ann Kendall. This pattern may not be reproduced except for personal use.